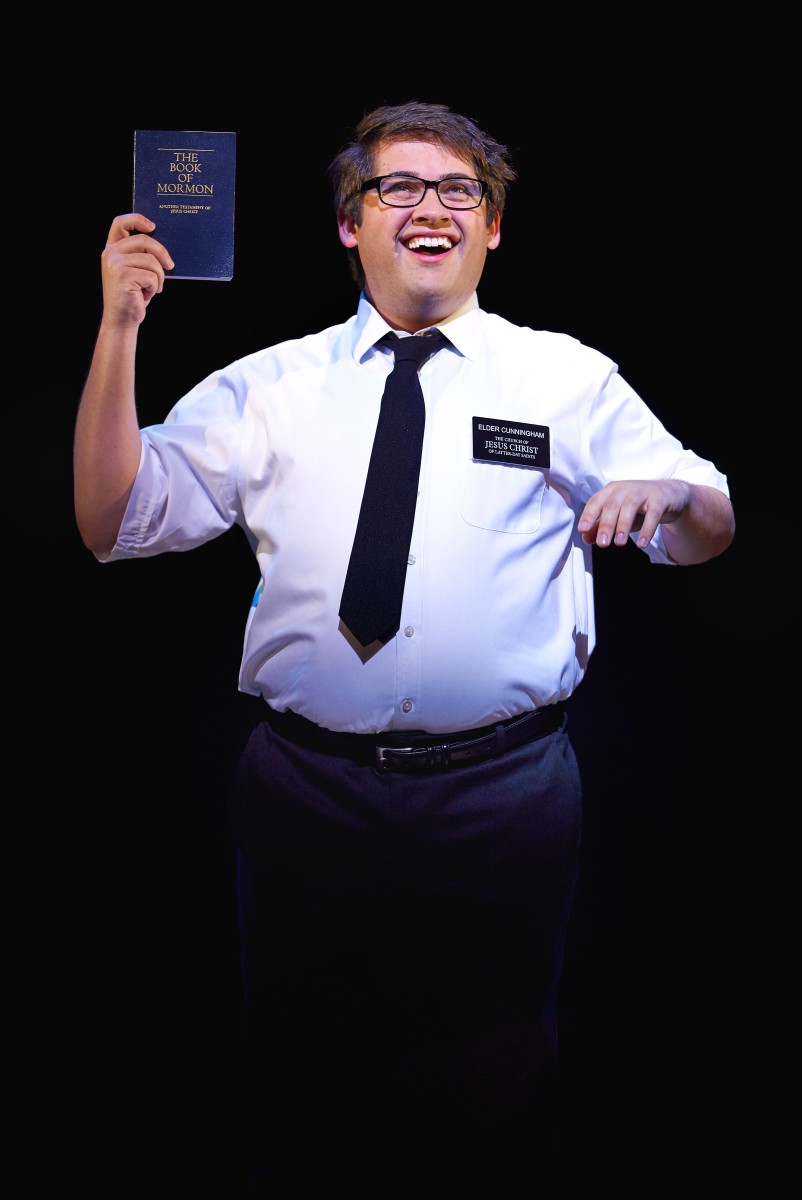 Conner Peirson in The Book of Mormon - Credit: Paul Coltas

How do you solve a problem like the Mormons?

Hot on the heels of the Sound of Music, a very different musical has landed at Norwich’s Theatre Royal.

South Park creators Matt Stone and Trey Parker’s satire on religion, American imperialism, and the naivety of youth has been running on Broadway for more than a decade and London’s West End since 2013, but only embarked on a UK national tour in 2019, before being cut short by Covid.

The show follows the adventures of two recently qualified Mormons, the perfect proselytiser Elder Price and the maladjusted missionary Elder Cunningham. The two are mismatched, but nonetheless find themselves sent to Uganda to try to spread the word of their church.

They get a rough welcome, facing warlords, AIDS, and a local catchphrase that – translated – sets the scene for the frankly blasphemous tone of the whole evening.

The show is very rude, and very funny, and despite the protestations of the Church of Jesus Christ of the Latter Day Saints representatives that have been leafleting outside the theatre, it is also actually rather affectionate.

The Mormons are portrayed as weird, sure, but not exactly malign – in fact they are mostly nice people. Religion is ridiculed, but the actual of communal belief – even if mixed with snatches of Star Wars, The Hobbit, and carnal knowledge of frogs – is a positive one that saves a village from brutal mutilation.

We definitely warm to the missionaries themselves, with even the ego-driven Elder Price mostly redeeming himself by the close.

In part this is down the cast. Connor Peirson as Cunningham is enchanting as the out-of-sorts missionary, making things up and just a step out of beat with his brethren. Robert Colvin does the all-American, perfectly fanged, full of self-belief Price beautifully, with Patrick George excellent as the sexually-repressed McKinley.

There is great work from the ensemble too, particularly the Mormon Elders – it’s still fairly unusual to see male-dominated choreography, but there is some fun tap and choral work here.

The book, music, and lyric – co-credited to Robert Lopez alongside Parker and Stone – is fabulous too, with Turn It Off, Sal Tlay Ka Siti, and Spooky Mormon Hell Dream among the lyrical highlights (the extravagant setting for this and the unlikely quarter of ‘guests’ is perfect.)

The comedy is smarter than South Park, which too often relies on repetition, and more nuanced than Team America, but liking those is a good guide to whether this will be your cup of tea. Given Norwich was named the least religious city in England in the 2011 census, it may have found its (non) spiritual home, earning a standing ovation from the audience.

The other dilemma is the pricing. Although there are a smattering of £10 and £25 tickets the top rate seats are £60, which is at the very top end for Theatre Royal shows. There is a live band, but the design and show doesn’t carry the same level of complexity of shows like Miss Saigon and Mary Poppins which have taken top whack previously.

It is ridiculously funny, but you really need to be in tune with the humour to get your money’s worth.