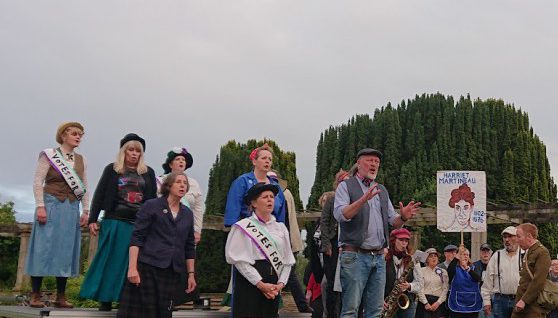 Songs of Hope and Protest

Norwich agitprop theatre group The Common Lot have returned with another vibrant outdoor show, this time focusing on the history of English protest songs.

Less closely aligned with Norfolk history than previous productions, Songs of Hope and Protest is a tie-up with University of East Anglia-based project Our Subversive Voice, that seeks to preserve a record of these folk songs for the future.

The show is rambunctious and entertaining, drawing on more than a dozen protest songs from the 18th century onwards, some with updated nods to current day events. There are also three new songs, written by Lot regular Charlie Caine.

It’s hardly a politically balanced collection, but then neither is the catalogue they are drawing from, and while it wears its heart on its sleeve it doesn’t ever take itself too seriously.

Drawn together in three months with mostly amateur performers, it’s a strong 70 minutes that is a perfect fit for outdoor theatre, and as a free-to-attend show you can’t argue with the value for money.