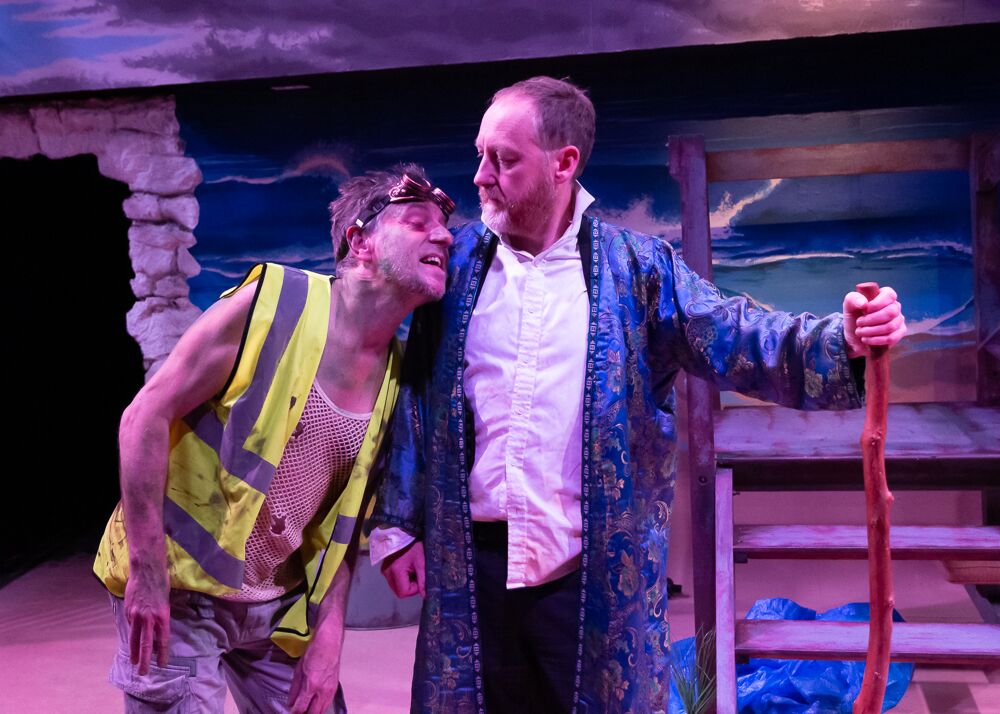 In what is a heavily-contested field, The Tempest is one of Shakespeare’s craziest plays.

While supernatural elements are not alien to the Bard it is unusual to have the hero be an actual sorcerer. Not only that, but although Prospero’s aim seems to be a sort of benevolent revenge our sympathy for him is limited by his brutish treatment of his spirit slave Ariel and native-in-chains Caliban.

In this production, other than Jen Alexander’s extravagantly arch-camp depiction of Ariel as a kind of blue-faced Puck, director Clare Williamson takes a relatively sane approach.

The production notes hint at a setting in a post-nuclear Orford Ness but, a few stickered barrels aside, that isn’t followed through in the production design. Several of the male parts are played by women – potentially most interestingly love interest Ferdinand – but this is treated as unremarkably as the transvestite actors of the Elizabethan era.

John Holden successfully carries the bulk of the text as Prospero, and while a convincing elder statesman it would have been nice to see some undercurrent of Lear-like twitching madness – he has after all been marooned on an island for 12 years.

Jess Hutching’s Miranda is sweet and innocent, and paired well with Michelle Moore as the doting would-be husband Ferdinand. Even their haircuts seem to match.

As Caliban, the much-abused ‘monster’ of the island, Ian Shephard fills the stage, shuffling, snarling, and shouting his injustices.

His booze-fuelled interactions with Alexandra Evans (Trinculo) and Stephano (Diane Webb) provide the comic meat of the play, with the latter two in full-on ham mode.

This is a solid and relatively traditional production that takes few risks; one scene where a shopping trolley of snacks is wheeled on hints at the potential for this to be something quite different.

It’s an enjoyable two hours, but if some of those nascent ideas had been blown up to gale force it could have really gone down a storm.

The Tempest continues at the Sewell Barn Theatre, Norwich until Saturday, October 26.