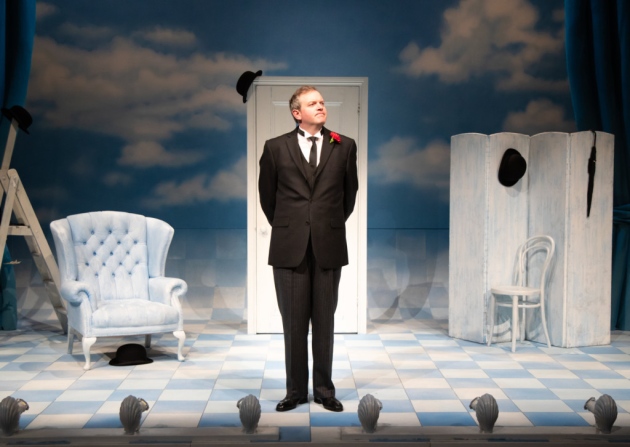 Miles Jupp in The Life I Lead

In the afterglow of the recent film sequel to Mary Poppins, this new one-hander play is a gloriously British evening of gentle and poignant comedy.

The piece, written by Norwich boy James Kettle, deals playfully with theatre conventions: Jupp sometimes directly addresses the audience, sometimes slips to soliloquy. He could just as easily be staring in his own dream, or possibly post-mortem existence, what with the backdrop of drifting clouds and an emblematic set dominated by a door with a Banks sized-hole cut through the middle, complete with bowler hat.

The narrative is fractured, dotting backwards and forwards in time and gradually piecing together some of Tomlinson’s most joyful memories – working with Julie Andrews, or finally connecting with one of his sons – to darker revelations: his father’s hidden life, and the fate of his first wife.

The deft script is littered with precious moments: “I did have a way of words; it was always something of a handicap” is how Jupp retells his first awkward meeting of Walt Disney, in one of the shows softly startling one liners.

Jupp is in his element, holding forth solo for just under two hours. His physical resemblance to Tomlinson helps, but what captivates the audience is that he shares that same mischievous twinkle: a review of the real man described him as portraying the caperings of the professional idiot, but it’s a phrase that just as easily fits much of Jupp’s career.

He is just as accomplished when switching to the embodiment of Tomlinson’s Napoleon and beef obsessed father, or miming one of the actor’s early stage roles creating a one-man crowd through a series of increasingly unlikely hats.

Selina Cadell’s direction keeps things at a gentle but advancing pace, and Lee Newby’s design is simple and suggestive. Matt Eagland’s lighting feels a bit overactive in places, but it’s the slightest of flaws in an overall accomplished piece, that dazzles with the most delicate of touches.