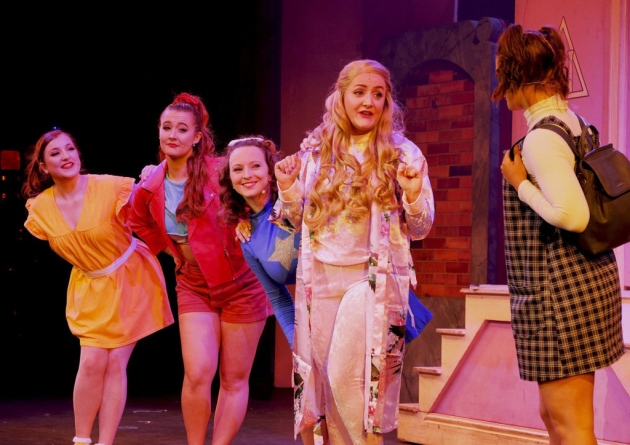 The sassy tale of Elle Wood and her attempt to prove herself gets the full musical treatment in this latest production of Legally Blonde by Threshold Theatre Company.

Based on the movie of the same name, the action sees Elle – played by Rebecca Jillings – shed her signature pink outfits and ‘blonde’ attitude to follow her boyfriend (Alex Green) to Harvard, where she not only turns out to be a better lawyer, but also finds a better partner (Thom Guttridge).

The sharp humour of the film is preserved in the witty book and lyrics, in a packed two hour plus show.

Jillings brings plenty of fizz to the title role, and is supported well by an earnest Guttridge and believably smarmy Green. Charley Smith nearly steals the show as hairdresser come life coach Paulette, particularly when teaming up with her love interest, the UPS Guy (Sam Watkinson) for a surreal spot of Riverdancing.

This is a big production, with over 30 on stage – including two dogs – and simply fitting it on the Norwich Playhouse deck is impressive. The sets feel a little clunky though, leading to a few minor technical glitches that perhaps could have been avoided with a less literal approach.

Artemis Read’s four-piece band (hidden somewhere in the bowels of the theatre) provide great and flexible live backing through the 24 musical numbers.

Like Elle, it’s clear that Threshold has ambition and director Dan Rayner and choreographer Dan Elliott ask for, and get, a lot from this amateur cast.

On opening night there were odd places where it looked like they might have overreached – costume change delays, early ensemble pieces lacking sparkle, and radio mic troubles – but the cast always pulled it back; by the finale everyone was looking sharp and sounding good.

The verdict: a witty, engaging and fun evening, with plenty of appeal.