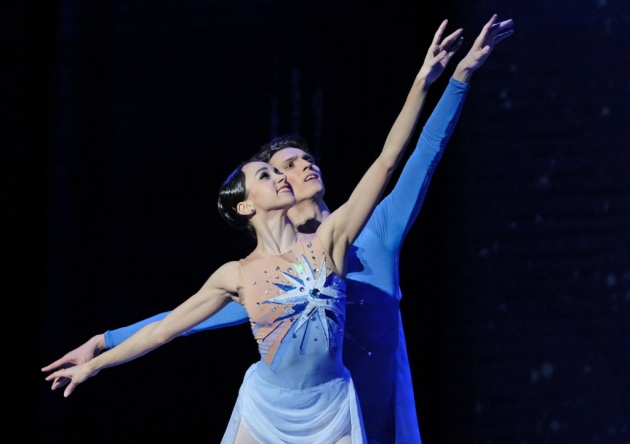 There has been a drastic evolution in the Russian State Ballet of Siberia’s touring performances.

Their style has changed from a strict classical approach to one that mixes tradition with fragments of more modern dance, and sets have shifted from shabby back sheets to this year’s digital projections.

Cinderella, with its chiming clocks and magic fits the new approach well, although the opening was slightly spoiled by the tick-tock of a giant second-hand not quite matching the orchestra’s percussion section.

That was quickly forgotten though thanks to the terrifying boldness of the corps, appearing as 12 blood-red behatted harbingers of time; fierce, angular, and threatening, they would later reappear to tear Cinders away from the ball as her bewitched clock runs out.

Valery Kungurov’s costumes are perhaps one of the boldest bits of this production, from the giant hair-rollers of the court dancers to the ghastly outfits of the stepmother and step sisters. Surprisingly the Fairy had a better dress than Cinderella, but both had decent bling.

Stepmother Pavel Kirchev is the standout performance of the show, clearly enjoying himself from entrance to curtain call. His fainting at the arrival of the Prince got genuine belly laughs, and the trio formed with ‘daughters’ Anastasiia Osokina and Perdita-Jayne Lancaster had the most fluidity.

Elena Svinko and Marcello Pelizzoni had moments of sweet tenderness as Cinderella and the Prince, particularly their palmers’ kisses, escaped from Romeo and Juliet. There was a little hesitancy in places, but sufficient grace and good lines to make this an endearing and touchingly innocent love affair.

The Prince’s search for Cinderella is curtailed in favour of some prolonged surrealist dream sequences, with the seasons (or as the cast list has it Spring, Orange, and Red) dancing through Cinderella’s head and leaving some of the audience scratching theirs, but overall this is the story we all know and love.

The pleasure in any familiar tale is the journey of getting there, and a few glitches aside, Sergei Bobrov’s company delivers some wonderful things to watch on the way.

Stories Down The Line