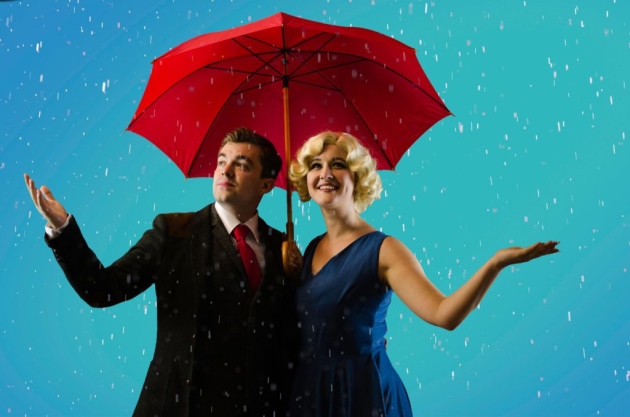 Singin' In The Rain

The best theatre is about magic: making the impossible happen. Sound Idea’s production of Singin’ In The Rain does just that and if you’re in the front two rows you’re likely to get quite wet too.

The iconic rain dance made famous by Gene Kelly comes gloriously to life on the Playhouse stage, with a downpour that covers the deck and splashes out into the auditorium.

Even on its own that’s enough to make you smile, but there are some quality performances here too.

Supposedly a supporting role, Nic Gordon’s Cosmo stands out thanks to his confidence, stage craft and sheer, obvious, delight at performing.

His slapstick in Make ‘Em Laugh and Moses Supposes is first rate, and just needs the ensemble to keep up.

Meg Artherton’s is deliciously despicable as the whining, screechy-voiced Lina Lamont, stomping and shrieking like a perfect diva, and her screen co-star Don Lockwood is lent an affable air by Chris Davidson.

He throws himself in to the tap, dance, and song with equal enthusiasm and talent. He can’t quite match Gene Kelly with an umbrella, but there’s no shame there.

The main quartet is rounded off by the wholesome wannabee actress Kathy Selden; Katrice Copland has a pure tone to her voice, slips effortlessly into the complicated choreography, and has good synchronicity with Davidson and Gordon.

The ensemble felt a little uncertain on opening night with too much hesitation and a lack of fluidity in some of the dance numbers, but nothing not fixable as the run matures. The same goes for a few technical hitches with misplaced set dressing and uncooperative sliding doors.

The important thing is that this young Norfolk company have aimed high, and Dan Smith’s artistic vision has created a show shot through with a sense of fun and enjoyment.

Easily worth getting a little wet for.