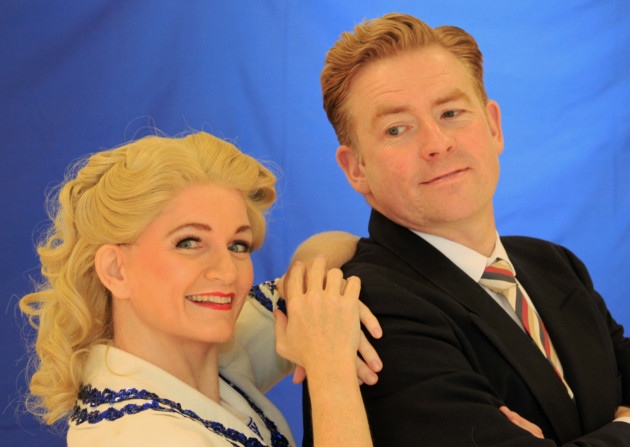 With Cole Porter’s sparkling lyrics and music you’re already on a steady course with Anything Goes – but with this production it’s a case of full steam ahead.

A strong cast, headed by Andrea Ferguson as Reno Sweeney, powers through the farcical goings-on aboard the SS American, mixing some of Porter’s finest songs with great dance and charming wit.

Ferguson’s voice is strong and she is an eye-catching presence on stage, working nicely off Andy Gledhill as Billy Crocker. The two have the lion’s share of the vocal work, handling classics like I Get A Kick Out of You, Easy to Love, and – of course – Anything Goes with easy confidence.

There is great comedy from Christopher Penn as bumbling aristocrat Lord Evelyn Oakley and Joseph Betts as Moonface Martin is a joy to watch: brilliant facial expressions and a real talent for physical comedy..

Ian Chisholm’s exuberant Elisha Whitney is a reliable note of humour from start to finish: silly, over the top, and a lot of fun.

Claire Doughty’s vocal talents are under-used as Hope Harcourt but she entrances when she gets the chance..

Perhaps the surprise star of the night was Kathryn Jones, standing in as Erma. Confident, sassy, and singing superbly, nevermind the sailors wanting to marry her – by the end I did! Definitely one to watch for future productions.

The ensemble gave life and depth to the set pieces, with Reno’s Angels performing strongly in the nightclub scene (and the politically incorrect Gypsy In Me revelatory number), and the crew quintet gave a particularly nice turn during Buddy Beware and the opening scene setting medley.

The 10-piece orchestra, neatly positioned on the ‘upper deck’ of the stage gave a consistently sharp backing to the action; no mean feat in a show like this.

There were some technical gripes: some of the scene changes came out slow and the lighting was a touch heavy-handed in places, but nothing that can’t be made ship-shape. Accents waned a little occasionally too, but then anything can happen on a transatlantic crossing.

This is a big show and the Norfolk and Norwich Operatic Society have definitely hit on the right course. All aboard!