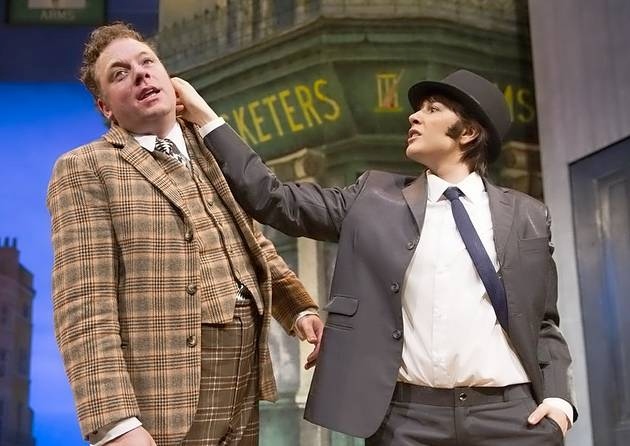 Torn loyalties are at the heart of this National Theatre touring production – both in the story and the delivery.

Bang at the centre is Rufus Hound as the eponymous moonlighting worker. Better known for his stand up comedy work, Hound is brilliant in this central role handling both scripted and improvised moments.

As he battles to keep on top of the instructions of both the disguised Rachel Crabbe (played with swagger by Rosie Wyatt as she pretends to be her dead brother) and the raffish Stubbers (embodied with glorious aristocratic stupidity by Edward Bennett) he steams through some expertly choreographed slapstick scenes.

Peter Caulfield as Alfie is a unrelenting foil for this, taking punch after door slam after cricket bat and delivering many of the laughs. The dining scene in particular is a masterclass in physical comedy, and Cal McCrystal deserves recognition for the direction here.

Where the production feels less slick is when it tries hardest to stick to its commedia dell’arte roots, trying to be all things to all people with a mix of high and low, of said and song.

Band The Craze are an accomplished and entertaining four-piece but their songs to cover scene changes are too intrusive, stopping you from being fully enveloped in the joy of the action.

Some of the scripted jokes are also overly laboured, detracting from the exuberance of the physical comedy.

The contrast is not quite as pronounced as one show, two directors but there is a definitely confused feel to parts of the show – trying to do so much means parts of it don’t work.

The remainder though, and Hound in particular, is a delight to watch.